What are the adjective questions?

What are the adjective questions?

Knowing the adjective questions will help you understand and identify adjectives.

Before we look at the questions, we need to make sure that you remember what adjectives are. Adjectives describe nouns and pronouns. 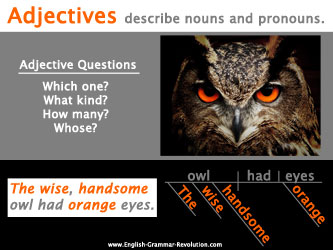 The, wise, and handsome are adjectives telling us more about the noun owl.

Orange is an adjective telling us more about the noun eyes.

What Are the Adjective Questions?

Adjectives usually answer one of the following questions about the noun or pronoun that they are modifying.

Which one?
What kind?
How many?
Whose? 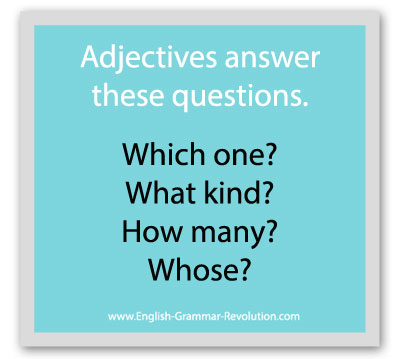 The and colorful are adjectives modifying the noun outfit.

(The is a special kind of adjective called an article. A and an are also articles.)

Baby is an adjective modifying the noun food.

Note that words can act as different parts of speech in different sentences.

In this sentence, baby is an adjective, but you can also use baby as a noun (She is our baby.) or a verb (Don't baby me!).

Several is an adjective modifying the noun sips.

Alice's is an adjective telling us more about the noun toys.

(Alice's is a possessive noun functioning as an adjective.)

Sentence diagrams give us a way to show how the words in our sentences are related to each other. Diagramming adjectives helps you see that they modify nouns and pronouns. Adjectives go on a slanted line under the noun or pronoun that they are modifying. 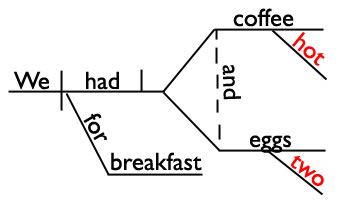 We had hot coffee and two eggs for breakfast.

My green and white book fell.