Commas show your reader that there is a pause in the sentence they are reading. It seems as if commas have more punctuation rules than any other form of punctuation. I've narrowed it down to eight rules for you.

1. Commas After Introductory Words and Clauses

When you list three or more things, use commas between the words.

When a number is over 999, use commas to separate the numbers.

5. Commas With Dates And Addresses

When you are quoting someone's exact speech, you must use quotation marks and a comma.

Nonrestrictive elements add information to the sentence, but they're not essential to the meaning of the sentence. We could remove them, and the sentence would still make sense. I know this sounds a bit confusing, but I have a really good trick that will help you remember this, and you can learn about it on this page that covers commas with appositives.

The punctuation rules for question marks are very simple. In fact, there is really only one rule!

These end interrogative sentences. This kind of sentence asks a question. Any time you ask a question, end the sentence with a question mark.

When should you use exclamation marks?

Use these at the end of exclamatory sentences (sentences that show emotion).

You can use either an exclamation mark or a comma after an interjection.

Use these to separate two complete sentences that are closely related.

Watch me diagram a sentence with a semicolon here.

There are three ways to use colons.

You can use a colon to introduce a single thing when you want to emphasize it.

This is only a legit move if the second sentence states a logical consequence of whatever is stated in the first sentence.

When you want to make something possessive (to show ownership), use an apostrophe.

Contractions use apostrophes to stand in the place of missing letters.

Here are two times you when should use quotation marks.

Whenever you quote someone's exact speech, you must use quotation marks.

I hope this list of punctuation rules was helpful.

Would you like to learn (or teach) the rules of punctuation? 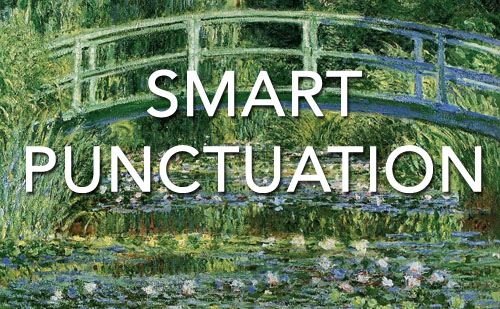 Back to English Grammar Home