Sign up and I'll meet you in your inbox every other Thursday with a grammar lesson. :)

The apostrophe has three purposes. Do you know them all? We'll go over all three, and I'll give you examples of each. Here we go!

2. Showing Omission of Letters or Numbers

Nouns name people, places, things, or ideas. When we want to show that a noun has possession of something, we use an apostrophe.

Sometimes, we add ' + s to the word, and sometimes we just add an '. Here are the rules.

This is Mark's cat. (The cat belongs to Mark.)

Those are the bus's headlights. (The headlights belong to the bus.)

I found my boss's glasses. (The glasses belong to my boss.)

* Different style guides give different information for using apostrophes with nouns that end in s, so the best thing to do is consult a style guide and be consistent with its advice.

I graded three students' papers. (The papers belong to the students.)

Do not add apostrophes to pronouns that already show possession.

Whose jacket is this?

2. Showing Omission of Letters or Numbers

To omit means to leave something out. Contractions are shortened forms of combined words. When we smoosh the words together, we leave out some of the original letters, and we use apostrophes to show where the letters are taken out.

shouldn't  (shouldn't = should not)

We also use them to show omitted numbers.

Many contractions contain a helping verb plus the word not. When you diagram these contractions, you must split the words up so that the helping verb goes in the verb slot and the word not goes in an adverb slot. Not answers one of the adverb questions. (To what extent?) You can write either n't or not.

He didn't write his name on his paper.

We always use these to show plurals of lowercase letters.

Dot your i's and cross your t's.

Some style guides suggest them to form plurals in other strange situations.

It's Your Turn!
Apostrophe Exercise

Directions: Find the words with errors and correct them.

3. Without his glasses, David walked into the womens restroom.

4. The squirrels love to run through my father-in-laws yard.

5. Enjoy the book. Its yours to keep!

3. Without his glasses, David walked into the women's restroom.

4. The squirrels love to run through my father-in-law's yard.

Psst! If you enjoy learning with video lessons, this is for you. 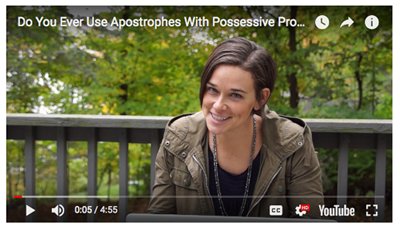 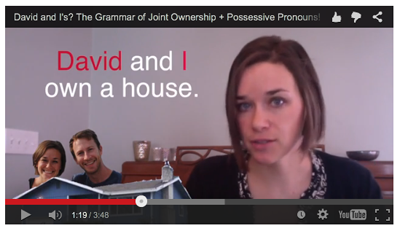 David and I's house? Learn the grammar of joint ownership with pronouns.

If you don't want to teach or learn grammar by yourself, click here to see how I can help you.

We have been using Grammar Revolution for a few months now, and I just want to tell you how helpful it has been. Slowly but surely, we are getting our school to incorporate your program on a broader level; it will be exciting and helpful to say the least!

Thank you for the opportunity to make teaching grammar fun!