What are helping verbs & verb phrases?

What are helping verbs & verb phrases?

Helping verbs (auxiliary verbs) do just what their name implies. They help the main verb in the sentence by telling more about the verb's tense, mood, and voice.

When we put one or more helping/auxiliary verb with a main verb, we get what is called a verb phrase.

Before we move on, I need to tell you something important. Are you ready? Good! The verbs on that list above can function as helping verbs. That wording is very important because some of those words can also function as main verbs. Let's look at an example using the word was.

Sometimes, the helping and main verbs are separated by other words. This often happens when we ask questions. With questions, the auxiliary verb tends to come at the beginning of the sentence, and the main verb comes later.

Words like never, not, and the contraction n't are not part of the verb. They are adverbs.

This seems obvious, right? They are made up of verbs, so what else would they be acting as?

The point here is that they are made up of multiple words and all of the words come together to act as one part of speech, a verb.

Might be exploding is telling us what the cheesecake is doing. It's acting as a single unit: a verb.

Did you call Owen?

Did call is asking what you did. It's acting as a single unit: a verb.

Owen has become a great cook.

Has become is telling us Owen's state of being. It's acting as a single unit: a verb.

Sentence diagrams can help us see that verb phrases function as verbs. Sentence diagrams are pictures of sentences that show us how parts of a sentence are related. They make the relationships between words, phrases, and clauses visual.

Verb phrases are diagrammed in the verb slot of the sentence diagram. They go on a horizontal line right after the subject. All of the words in the verb phrase go in the same slot because all of the words are coming together to function as the verb!

Remember that verb phrases are made up of at least one helping verb and a main verb.

Let's look at an example sentence diagram with an actual sentence. 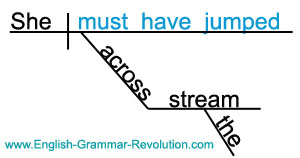 She must have jumped across the stream.

Must and have are helping verbs, and jumped is a main verb. These three verbs together form a verb phrase.

The word of never acts as a helping verb, so would of, could of, and should of are incorrect. They are not verb phrases.

The correct versions are would have, could have and should have or would've, could've, and should've.

You can learn more about this mistake here. 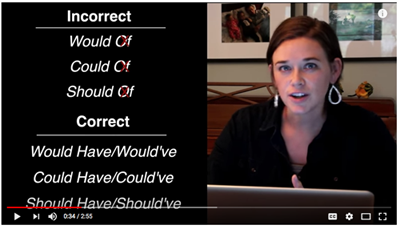 There you have it! Now you're a pro at identifying and understanding helping verbs!

[Get Smart] is easy to use, and any time I can get kids and teens interested and saying, "This is fun!" when we diagram, I'm thrilled!