If you've studied sentence structure at all, you've read terms like compound sentences and simple sentences. Today, we'll look at the difference between these two.

Let's get you in the right frame of mind with a tiny quiz. Are the following sentences simple or compound?

A. Lewis and Alice played in the backyard.

B. Lewis and Alice played and read in the backyard.

C. Lewis played in the backyard, and Alice read in the house.

I'll tell you the answer in a minute. But first...

I kicked the ball.
It hit Tom.

We're going to use sentence diagrams to help us understand this lesson. Diagrams are pictures of sentences. Here's a diagram of that first sentence. Don't worry about understanding it exactly. There's just one thing I want you to notice.

Look at that main horizontal line with the words I, kicked, and ball. Do you see that there is also a vertical line going through it between I and kicked? Here's a picture with a yellow dot highlighting the part that I'm talking about.

The part that is highlighted - where those two lines cross - lets us know that there is a clause in the diagram. We can tell that this sentence is simple because it contains just one such cross.

Sometimes, we want to join simple sentences together to form one sentence. When we join two or more independent clauses into one sentence, we have a compound sentence.

As you might have guessed, we're going to look at another sentence diagram.

How many long horizontal lines with short vertical lines going through them do you see in this diagram? I'll put yellow dots over them again to make them easy to spot, but know that diagrams don't generally have these yellow dots. :) 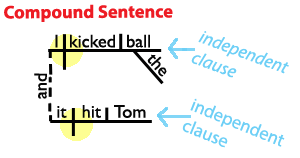 Finally! Answers To The Quiz

Compound means that something is made up of more than one part.

Other parts of sentences can be compound as well.

You get the picture. Simple sentences can contain compound elements (such as subjects, verbs, direct objects, etc.) - just not compound clauses. Sentences are only compound when they contain two or more independent clauses (and no dependent clauses).

Let's explore this by going back to the quiz that we started with.

A. Lewis and Alice played in the backyard. --> Simple Sentence

B. Lewis and Alice played in the backyard and read in the house. --> Simple Sentence

C. Lewis played in the backyard, and Alice read in the house. --> Compound Sentence

Sentences A and B are simple because they contain just one independent clause. They do contain compound elements, but the sentences themselves are not compound. Let's look at some diagrams to see this in action.

A. Lewis and Alice played in the backyard. --> Simple Sentence With Compound Subject 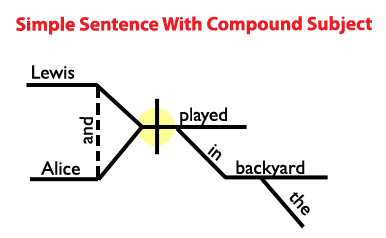 Notice that the diagram shows us only one of those cross designs, meaning that there's only one clause in this sentence. This sentence does have a compound subject, and it's easy to see that in the diagram. Both of the subjects (Lewis and Alice) are "using" the verb played. Both of them performed that action. Notice that you can follow the solid lines under Lewis and Alice to the verb played. They are both "sharing" the verb.

B. Lewis and Alice played in the backyard and read in the house. --> Simple Sentence With Compound Subject & Compound Verb 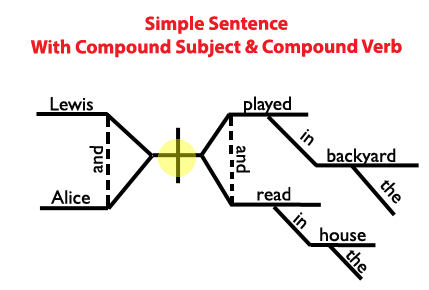 This diagram looks crazy! But, you're now an expert at finding the cross part in the diagram. You can see here that there is only of these designs. That's because there is only one clause in this sentence!

In order to be compound, the two subjects and verbs can't "share" each other.

C. Lewis played in the backyard, and Alice read in the house. --> Compound Sentence 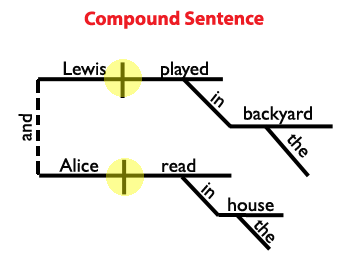 Finally! We have a compound sentence. Notice that this sentence diagram contains two dots. That means it contains two clauses. Also notice that, unlike the other diagrams, the subjects of the two sentences each have their own verb. They're not "sharing" the verb here. Lewis played, but he didn't read. Alice read, but she didn't play. Since this sentence has two independent clauses (and no dependent clauses), it is a compound sentence.

I hope this lesson cleared things up for you!