What is a dangling participle?

What is a dangling participle?

Do you know what dangling participles are? Do you know that you should avoid them?

Let's not get ahead of ourselves here. You need to learn about participles first. Participles are a type of verbal. That means that they're formed from verbs, but they don't act as verbs. Participles act as adjectives. Let's check out some examples of participles, shall we?

Filtered is a participle. It's formed from the verb filter, and it's acting as an adjective. It tells us more about the noun water. Which water? The filtered water. If you look at the sentence diagram, you can see that filtered is connected to water. That shows us that it's modifying water.

Look at the shooting star!

Shooting is a participle. It's formed from the verb shoot, and it's acting as an adjective. It tells us more about the noun star. Which star? The shooting star. (Of course, shooting stars aren't actually stars. They're small pieces of rock that burn up as they hit earth's atmosphere. You probably already knew that though, right?)

Now that you understand participles, we need to talk about participial phrases.

I know. You just want to learn about participles that dangle, but trust me here. You need to learn this stuff first. You're being such a good sport. We're almost there.

Walking to the mailbox, Peter looked at the sky.

(Psst! This sentence is from the children's book A Letter To Amy.)

Yay! You remember that participles act as adjectives, right? That means that they modify nouns.

Sometimes, it can be difficult to tell which noun a participial phrase is modifying. In fact, the noun that it is intended to modify may not be stated in the sentence! That's not a good thing. When this happens, it's a mistake called a dangling participle because it just dangles there with nothing to modify.

Sitting on the park bench, the sun disappeared behind the clouds.

That poor participial phrase is just dangling there with nothing to modify. Poor thing.

To fix participles that dangle, move them so that they come right before or after the noun or pronoun that they're modifying. 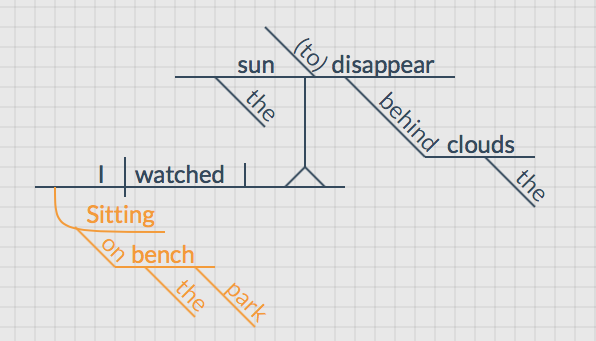 Sitting on the park bench, I watched the sun disappear behind the clouds.

Now, sitting on the park bench clearly modifies the pronoun I, so it's not dangling any longer.

A closely related mistake is called a misplaced modifier. This happens when a participial phrase modifies a noun other than the one intended. This makes sense because it's a modifier (an adjective), and it's in the wrong place. One great thing about them is that they're usually quite entertaining. 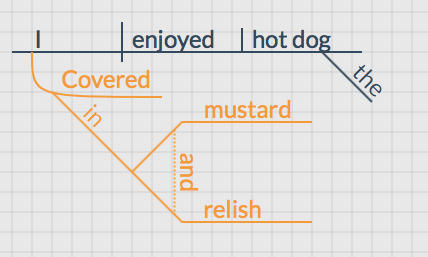 Covered in mustard and relish, I enjoyed the hot dog.

Covered in mustard and relish is a misplaced modifier. It contains the participle covered, and it's modifying the wrong word.

As the sentence is written, covered in mustard and relish is modifying I, but that doesn't make much sense!

Here's one way that you could fix that sentence.

I enjoyed the hot dog covered in mustard and relish.

Covered in mustard and relish is now a regular, old participial phrase. It's not misplaced now because it properly modifies hot dog.

Now you know that you should avoid dangling participles and misplaced modifiers unless you're trying to be funny. I hope that you enjoyed this lesson!

I ordered your complete set of courses and books. I am extremely pleased with the thoroughness of the materials, and I really like your videos.