Today, we're diagramming a quotation that is sort of from Henry David Thoreau.

How can something be "sort of" by someone? Well, the quotation, which is usually attributed to Thoreau, is actually a paraphrased version of a section of his book Walden. (Scroll to the bottom of this page to read the real version.)

Go confidently in the direction of your dreams.

Live the life you have imagined.

The video only covers diagramming the first sentence, but you can also see a diagram of the second sentence below.

Go confidently in the direction of your dreams.

in the direction = prepositional phrase (adverb)

direction = noun (object of the preposition)

of your dreams = prepositional phrase (adjective)

dreams = noun (object of the preposition)

Live the life you have imagined.

(that) you have imagined = dependent adjective clause

After trying to figure out where Thoreau wrote/said this, I discovered that this quotation is actually a paraphrased section from his book Walden. 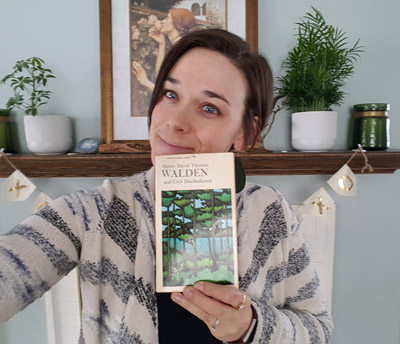 If one advances confidently in the direction of his dreams, and endeavors to live the life which he has imagined, he will meet with a success unexpected in common hours … In proportion as he simplifies his life, the laws of the universe will appear less complex, and solitude will not be solitude, nor poverty poverty, nor weakness weakness.

Someone simplified that passage and made it into an imperative sentence, but I don't know who. It seems like that person should get partial credit. :) If you have any leads, let me know.

Your simple explanations about the seemingly complex English language have been wonderful for my students who did not "get" it. My students (most diagnosed with "serious" issues) can identify verbs/subject/object in sentences easily and verbalize why these are important in language.

Go Back to the Celebrity Quotes Page

Back to English Grammar Revolution Home