What are linking verbs?

What are linking verbs?

Are you ready to learn about linking verbs? In this lesson, we'll go over what they are and how they differ from action verbs, you'll learn how identifying them can be kind of tricky, and then you'll take a quiz. Let's do this! 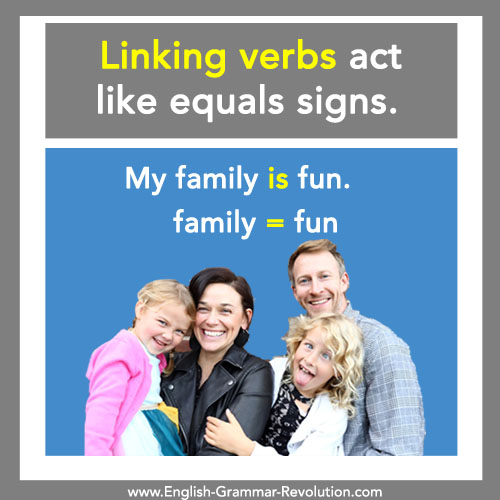 Let's start by looking at the definition of a verb. Do you know what a verb is? Check out this definition and notice that there are two main categories of verbs.

Verbs are words that show actions (the first category)
or states of being (the second category).

You probably feel fairly comfortable with the first category: actions.

Action verbs aren't very difficult for most of us to understand because we can easily visualize actions.

Our life is made up of actions that we think about on a regular basis. In fact, you probably have some version of this sentence going through your mind every day and every night: I must feed the dog, wash the car, write the report, and make dinner.

Just look at all of those action verbs!

What you probably don't have running through your mind constantly is a to-do list that's made up of the second category: states of being. Yes, "states of being" sounds like a strange phrase, but it just means the state or condition of someone or something.

Linking verbs are the verbs that show us states of being, and they're a little bit harder for most of us to grasp.

Here's what it would look like if your to-do list was made up of linking verbs: I must feel relaxed, remain calm, become a great student, and smell clean. Okay, I admit that that that was a pretty strange list. I was definitely struggling to write to-do-list sentences with linking verbs.

Let's look more closely at what linking verbs are and what they do, shall we? Here we go!

What do linking verbs do?

Do you happen to remember that every sentence needs to have a subject? It's true! The subject is the word that tells us whom or what the sentence is about.

Linking verbs tell us about the state or condition of the sentence's subject. Let's look at some examples.

Elizabeth is a teacher.

Emily is the subject in the first sentence. The linking verb feels connects Emily with a word that describes her state of being, happy. Happy is an adjective.

Elizabeth is the subject of the second sentence. The linking verb is connects Elizabeth with a word that renames who she is, teacher. Teacher is a noun.

Notice that these verbs function as equals signs between the subject and an adjective or noun. 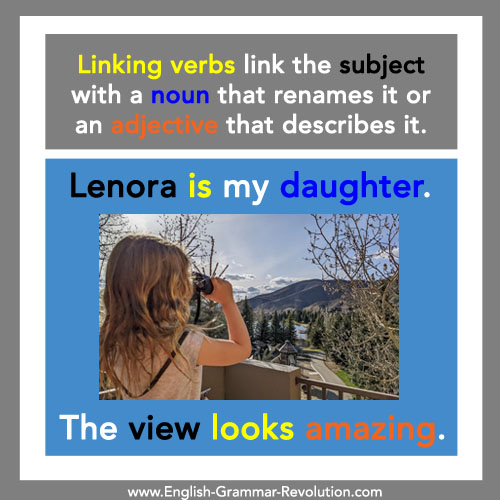 This is a very important thing to note. A linking verb is a verb that links the subject of a sentence with either a noun that renames it ("predicate nominative") or an adjective that describes it ("predicate adjective").

If you've been on this website for very long, you know that I love to use sentence diagrams to help teach grammar. Sentence diagrams are pictures of sentences that help us SEE how the words in a sentence are grammatically related. Let's check out a basic diagram of a sentence with a linking verb.

Notice the words in each slot and the types of lines between the words.

Find the line between the linking verb and the predicate noun or predicate adjective. Do you see it? What do you notice about it? I hope you noticed that it's slanted back toward the subject.

That slanted line helps you remember that the predicate adjective or predicate noun is going back to describe or rename the subject. Isn't that neat?

There are many, many verbs that name actions, but there are only a handful of verbs that can be linking verbs.

Memorizing that list can be really helpful if you're just learning grammar, but here's something very important to keep in mind: some of the words on this list can also act as other types of verbs.

This means that if you see one of these words out in the wild, it might be a linking verb...or it might not! For that reason, I like to think of this list as potential linking verbs. :)

How are you ever going to know if a word is a linking verb or some other type of verb? Well, you'll use your brain, of course! You'll ask yourself things like this:

A. I turned the page.

B. I turned green.

How did that go? Be sure to have an answer before you move on. Okay...are you ready?

In sentence A, turned is naming an action. That means that it's functioning as an action verb.

In sentence B, turned is describing the state of the subject. That means it's functioning as a linking verb.

Did you get that correct? I hope so! 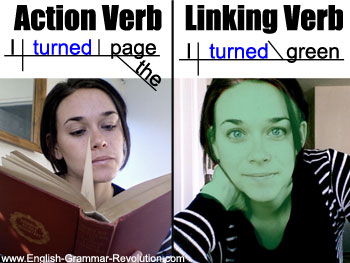 I hope that you remember that linking verbs link the subject of a sentence with either a noun (that renames the subject) or an adjective (that describes the subject). Let's take a closer look at these nouns and adjectives!

Do you remember that nouns are words that name people, places, things, or ideas?

There are certain nouns that come after linking verbs and do the job of renaming the subject of the sentence. We call these nouns predicate nominatives or predicate nouns.

Let's look at some sentences that have linking verbs and predicate nouns.

Elizabeth is a teacher.

Mike will be the president of the club.

Jolene was a runner.

Notice that all of those predicate nouns come after a linking verb and rename the subject of the sentence.

Do you remember what adjectives do? Adjectives are words that modify nouns and pronouns.

The adjectives that come after linking verbs and describe subjects are called predicate adjectives.

Let's look at some sentences that have linking verbs and predicate adjectives.

Dan seemed sad after the game.

Marge grew tired during the concert.

Notice that all of those predicate adjectives come after linking verbs and describe the subject of the sentence.

It's time for you to quiz yourself!

Here you are, diligently reading this page, and that tells me that you're probably the kind of person who knows how to study in order to make your studying the most effective that it can be.

You know that you need to quiz yourself on this information in order to make sure that you really understand it. Well, I'll make it easy for you and give you a little quiz right here! You'll find the answers below.

Directions: For each sentence below, name the subject, linking verb, and predicate noun or predicate adjective. For extra credit, diagram the sentences. (Or at least diagram the parts that you've learned about on this page.)

1. The weather was beautiful.

2. Ron Swanson is the manager of the office.

1. The weather was beautiful.

2. Ron Swanson is the manager of the office.

ACTION--> My grandma grew flowers in a huge greenhouse.

LINKING --> I grew tired of eating the same thing every day. (I = tired)

ACTION --> I turned the key, hoping that the door would open.

LINKING --> I turned pale while riding the merry-go-round. (I = pale)

I just want to say how wonderful we think this grammar curriculum is. My son and I have been working through it. It's so easy to follow, and we love your teaching style. (-: