Balance As A Noun & Verb

Balance As A Noun & Verb

In this lesson, we're going to talk about balance as it relates to our lives.

Most of us live very hectic lives. We have long to-do lists and many work and family responsibilities.

Achieving balance sounds like a pretty good idea! Let's examine how a shift in thinking about the word balance might help you live better. Let's go!

Whenever the stars align and I'm able to wake up before my two daughters, I pour myself a delicious cup of coffee and sit down to read personal and professional development books. It's a great way to start the day!

I was recently reading this book, The One Thing by Gary Keller, and I came across an idea that helped me think about how to live better.

The idea relates to grammar.

Here's what the author writes:

"Nothing ever achieves absolute balance. Nothing.

No matter how imperceptible it might be, what appears to be a state of balance is something entirely different - an act of balancing.

Viewed wistfully as a noun, balance is lived practically as a verb.

Think of balance as a verb rather than as a noun.

Gary Keller, the author of this book, challenges us to think of balance as a verb (something that we do) rather than as a noun (a state that we attain).

As he says, "Balance is something we constantly do."

I found this idea quite helpful, and I hope that you do as well! It reminds me to live my life in a particular way rather than to pursue a particular state.

See the difference in sentence diagrams.

Sentence diagrams are pictures of sentences that illustrate the grammar of the sentence.

Here is an example to show you how some of the parts of speech are diagrammed.

Let's look at how the shift from balance as a noun to a verb looks in a sentence diagram.

Balance As A Noun

My life is in balance.

Balance is the object of the preposition in. It's a noun.

Balance As A Verb

I balance my life.

Balance is a verb.

Most of us think of the parts of speech as something that we learn in order to know more about grammar and language.

I like this idea of shifting balance from a noun to a verb because it shows us how the parts of speech themselves are useful concepts for understanding life and how to live. 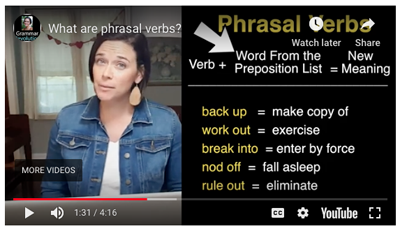 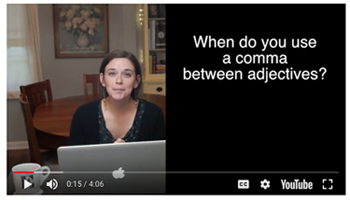 When do you use a comma between adjectives?

I continually find your wonderful email messages to be uplifting and inspiring.
- Gary