An adjective clause is a subordinate clause that is used as an adjective. That means that the whole clause modifies a noun or pronoun.

Your Mini Lesson on Adjective Clauses

This is the green house.

Green is a word modifying the noun house. It is an adjective. Now, look at this sentence.


This is the house that Jack built. 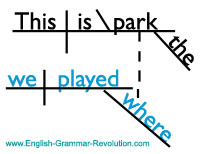 This is the park where we played.

You can see from the diagram that it is acting as the direct object. Think of it as Jack built that.

If the adjective clause is being introduced by a relative adverb, the relative adverb is simply acting as an adverb. It has no other function in the clause. See these pages for more help: Are you ready to diagram? You can do this! The answers are at the bottom of the page.

1. I love the person who cleaned the house!

2. Colin walked into the house that had been sold.

3. Are teachers who are extra nice paid double?

4. The boy with whom I spoke drew that picture.

6. The presents, which were wrapped in blue and green paper, looked perfect!

7. The woman who looks so happy danced on the dance floor until the club closed.

8. I gave her the apple, which was sitting on the table.

9. Cathy, we should shop at the stores that have the best prices.

10. This book is dedicated to my husband, whom I love. 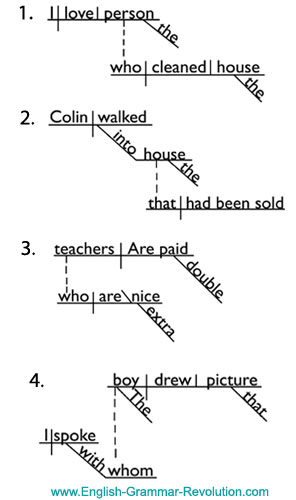 5 - 10: These answers are only available in the Sentence Diagramming Exercises Ebook.

I love your enthusiasm for this subject!
- Laura, Homeschooler