You probably already know that nouns are words that name people, places, things, or ideas. You might also know that we can categorize nouns based on certain features that they share.

For instance, we can divide nouns into proper nouns and common nouns. Another way that we can classify nouns is by whether or not they are countable or uncountable, and that's the topic of this exciting lesson!

The definitions of these types of nouns are exactly what you would think they would be!

Countable nouns are nouns that can be counted.

Since countable nouns can be counted, they can be singular (one) or plural (more than one). Notice that we can say cracker (singular) or crackers (plural), and they both make sense.

We can also say How many before them, but not How much.

How many plants did you buy?

Uncountable nouns are nouns that can't be counted.

We can say How much before them, but not How many.

How much water should I use?

How much homework do you have?

If you're a native English speaker, you most likely absorbed this lesson when you were a child, without anyone pointing it out to you. In fact, you can probably figure out yourself which nouns are countable and which are uncountable just by adding an -s to the end of the word and testing to see if it "sounds right."

Why This Matters (Fewer vs. Less)

Determiners are a category of adjectives. (They describe nouns.) There are many determiners. Here are just a few.

If you'd like more details on this, I suggest looking at the helpful chart on this website. 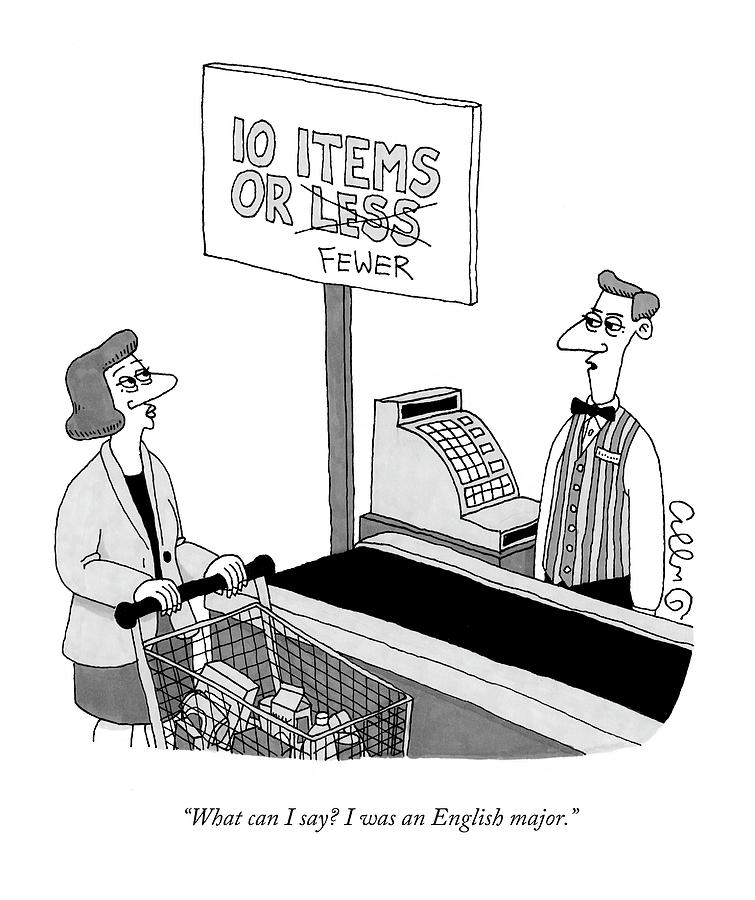 Look at this cartoon and see if you can you explain why the sign was incorrect when it said less.

Do you have an answer? Good! Here's the scoop:

The noun being modified here is items. Since items is a countable noun, the correct determiner is fewer.

Some Nouns Can Function As Either

I bought many cheeses for the party. (countable)

We can't count uncountable nouns, so you'll often see units (cups, bottles, slices) used along with the noun in order to refer to certain amounts.

I don't know about you, but I think it's pretty easy to come up with countable nouns. Uncountable nouns, however, are a bit harder to generate. Because of that, I thought I'd provide you with a little list of uncountable nouns just to get your wheels turning. :)

Using Get Smart has helped us to understand the English language so much better. Mrs. O'Brien explains things so clearly and repeats information at just the right amount. The video lessons are short and to the point. The layout of the workbook is conversational and easy to understand with plenty of examples. We love it!