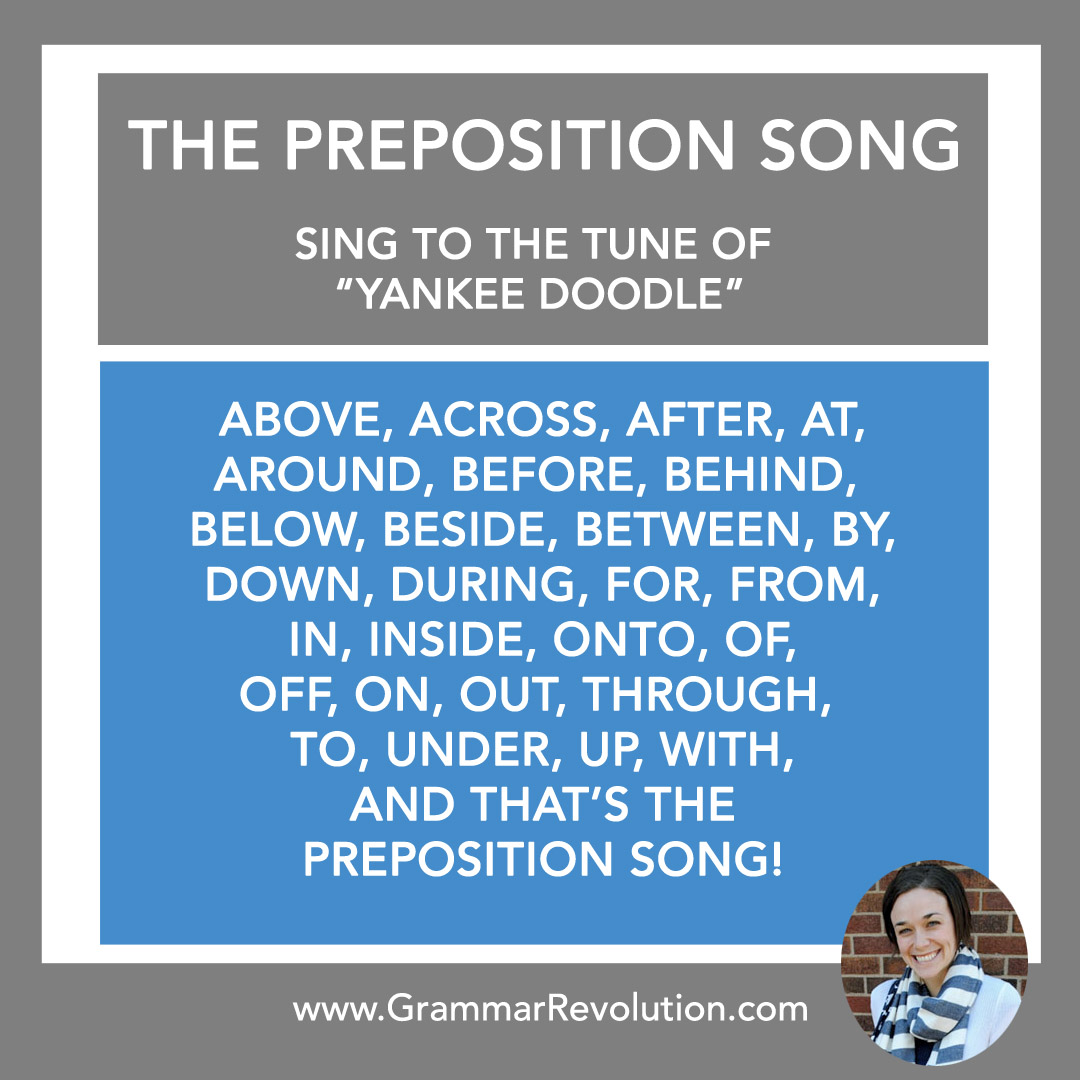 above, across, after, at, around, before, behind,
below, beside, between, by, down, during, for, from,
in, inside, onto, of, off, on, out, through,
to, under, up, with
And that's the preposition song!

This list contains one-word, two-word, and three-word prepositions. Sometimes, words act together to form one preposition.

WARNING: Keep in mind that the words on this list have the potential to be prepositions. Many of these words can also function as adverbs and other fun things. How can you tell the difference? I'll teach you all the secrets below this list. :)

A aboard, about, above, according to, across, after, against, ahead of, along, amid, amidst, among, around, as, as far as, as of, aside from, at, athwart, atop

B barring, because of, before, behind, below, beneath, beside, besides, between, beyond, but (when it means except), by, by means of

D despite, down, due to, during

E except, except for, excluding

F far from, following, for, from

I in, in accordance with, in addition to, in case of, in front of, in lieu of, in place of, in spite of, including, inside, instead of, into

N near, next to, notwithstanding

P past, plus, prior to

R regarding, regardless of

T than, through, throughout, till, to, toward, towards

U under, underneath, unlike, until, up, upon

W with, with regard to, within, without

The Mean Thing About This List
(The Secret About Prepositions)

That's not very nice, is it? You probably feel a bit like you were tricked. I'm sorry about that. I would change the rules of language if I could so that it would be easier for you to figure all of this out.

Of course, I can't do that, but I can help you use that powerful brain of yours to tell when a word is a preposition and when it's not a preposition. Are you ready? Good.

Here is the one thing that you need to remember: prepositions are ALWAYS in prepositional phrases.

Look at these examples of prepositional phrases with the eye of a detective. What do you notice about them?

I walked to the park.

The cat climbed up the tree.

They biked around the block.

Prepositional phrases begin with a preposition (to, up, around) and end with a noun or pronoun called the object of the preposition (park, tree, block).

The answer comes to us when we look at the definition of a preposition. 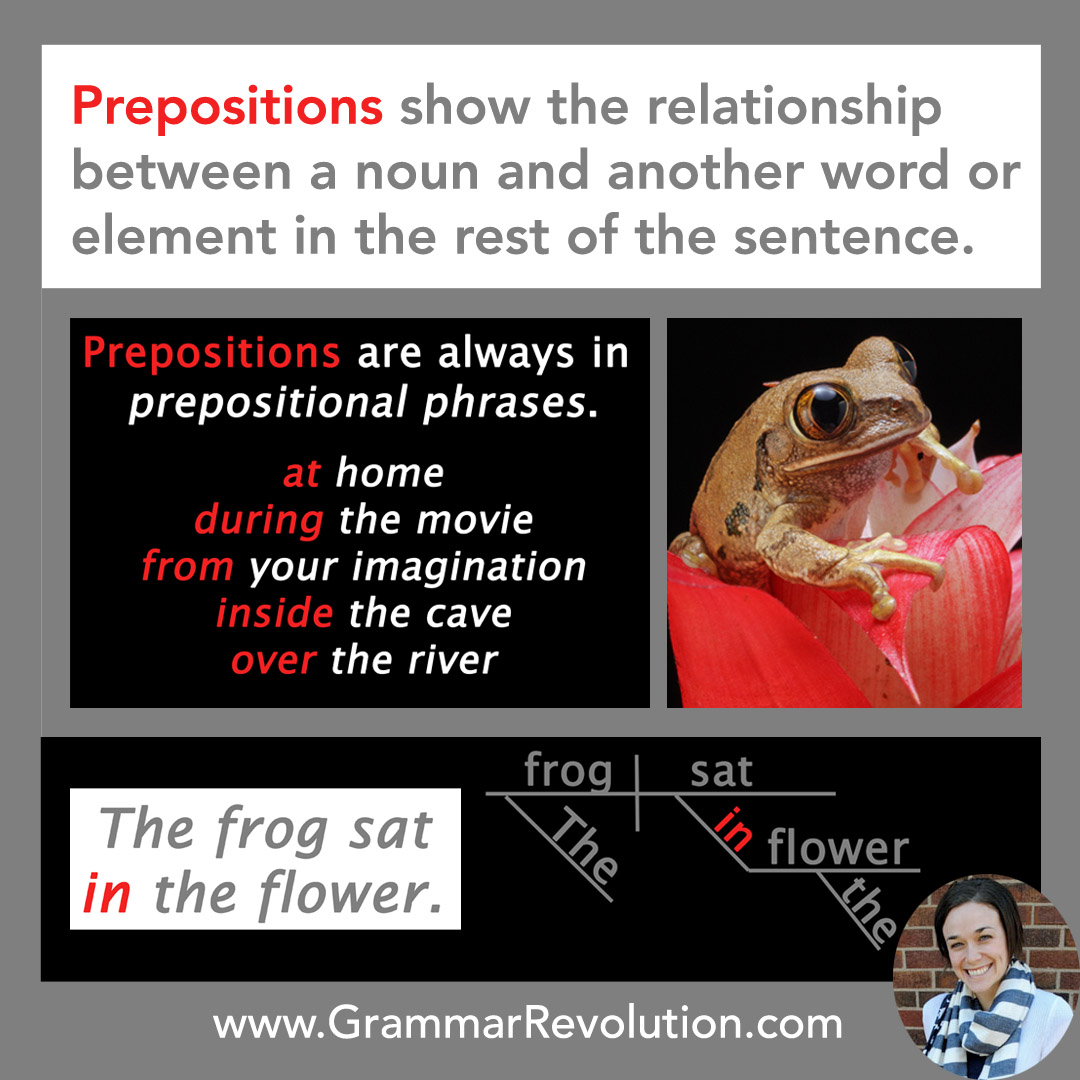 Prepositions are words that show the relationship between a noun/pronoun and some other word in the sentence.

In order for a preposition to do its job (to show the relationship between a noun/pronoun and another word in a sentence), it needs to be followed by that noun or pronoun.

I sense that you may be furrowing your brow in a state of confusion right now, so it's the perfect time for us to look at some sentence diagrams, which will make all of this visual.

Sentence diagrams are pictures of sentences that show us how the words are grammatically related.

In the diagram, the preposition to, which is on a slanted line, is connecting the noun park with the verb walked.

It almost looks like a little bridge, doesn't it? You can think of a preposition as a noun bridge if that helps.

to the park = prepositional phrase

park = noun (object of the preposition)

Prepositional phrases are always diagrammed like that. The preposition goes on a slanted line between the object of the preposition and a word in the rest of the sentence.

Now it's time for you to take a tiny quiz. In which sentence is down a preposition?

A. The cat ran down the tree.

B. The tree fell down.

I'll give you a hint and show you the sentence diagrams of those sentences.

The tree fell down.

Are you ready for the answer?

In sentence A, down is a preposition. It's in the prepositional phrase down the tree.

In sentence B, the word down isn't in a phrase, so it's not a preposition. (Here, down is an adverb telling us where the tree fell.) 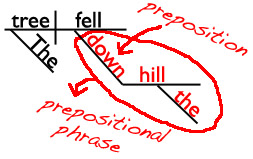 The tree fell down.

If we wanted to, we could change sentence B so that down was a preposition instead of an adverb. Can you think of how we would do that?

HINT: Turn it into a prepositional phrase.

The tree fell down. (adverb)

The tree fell down the hill. (preposition)

That's all there is to it! You can learn more about diagramming prepositions and prepositional phrases here if you'd like.

I hope that you enjoyed this lesson and this list of prepositions!