What are objective complements?

What are objective complements?

Be sure to take the short quiz at the bottom of this page after you watch the video or read the lesson.

Let's start with an example. Can you identify the function of all of the words in the following sentence?

We named our daughter Alice. 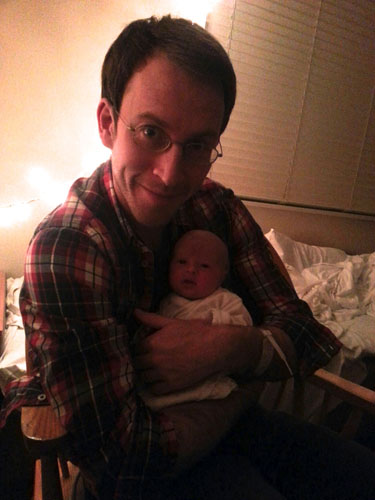 This was taken right after Alice was born.

If you've been studying grammar, you were probably able to identify Alice as a noun, but were you able to figure out what function Alice is serving in the sentence? Alice is something called an objective complement.

What is an objective complement?

An objective complement is a noun or adjective that completes the meaning of the verb and modifies, names, or renames the direct object. (Since these modify, name, or rename direct objects, you'll only find them in sentences that have direct objects. That also means the sentence will have a transitive active verb.)

This music makes me happy.

They elected my uncle mayor.

We consider you good friends.

How did that go? Were you able to say that consider is the verb, you is the direct object, and friends is the objective complement? If you identified friends as a noun, you also get bonus points. Yay!

Objective Complements & The Expletive As

I introduced him as Mr. O'Brien.

They elected my uncle as mayor.

Sentence diagrams are pictures of sentences. These pictures show us the structure of the sentence.

We named our daughter Alice.

I introduced him as Mr. O'Brien.

Psst! There is another way that objective complements have been diagrammed, and I wanted to show you that as well. (I prefer the method above, but if you've already learned to diagram them this way, it's fine too.) 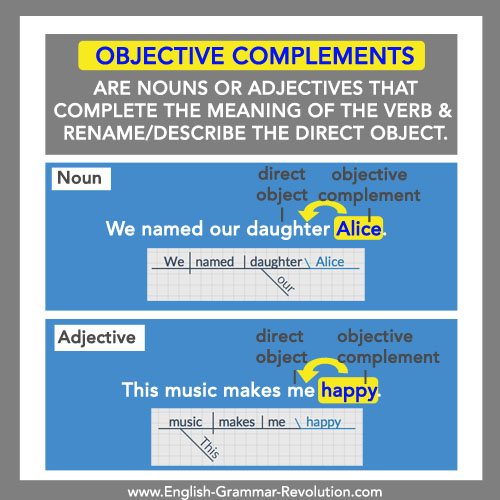 It's Time For A Quiz

Don't be a passive learner. The best way to learn something is to actively test yourself. Give it a try with the quiz below.

Identify each word in the following sentence. If you've already learned how to diagram sentences, you should also diagram them. You'll find the answers just below this section.

2. The students kept the room tidy.

3. His family calls him Dave.

4. My dad made the chili very spicy.

Diagramming sentences and actively recalling what you're learning are two of the components in our most popular grammar program. You don't need to know any grammar to get started, so there's no need to be intimidated. Check it out if you'd like a done-for-you curriculum created and presented by yours truly.

Okay, are you ready to check your work?

I painted my room red.

The students kept the room tidy.

His family calls him Dave.

My dad made the chili very spicy!