Pronouns are words that take the place of nouns.

How good is your vocabulary? Let's take a peek into the dictionary.

Possess: to have, to own

Knowing what possess means will help you remember what these kinds of pronouns do. They show possession.

Here are the possessive pronouns that can be used alone.

mine, yours, his, hers, ours, theirs, whose

When they are used alone, these pronouns can do any of the noun jobs (subject, direct object, object of the preposition...).

It may sound a little bit strange, but that sentence works. Yours is the subject of the sentence.

Have you started diagramming sentences yet? If you have, you'll be happy to know that when these guys act alone, you diagram them just like you would diagram any other noun or pronoun.

Since nouns and pronouns can perform many jobs in our sentences, you must first decide which job the pronoun is performing.

Then, you'll be able to diagram it like a rock star!

Here are the possessive pronouns that are used before nouns.

Although these pronouns basically function as adjectives (Hey, they are modifying nouns!), some people still call them pronouns.

I focus on the fact that they are functioning as adjectives, and so I call them adjectives.

The word my is helping to tell us a little bit more about the noun cookie. It;s modifying a noun, so it is acting as an adjective. When these guys are used before nouns, diagram them just like adjectives.

Find the noun that the pronoun is modifying and place the pronoun on a slanted line under that noun.

In this picture, you could place the pronoun anywhere that it says adjective.

To learn more about diagramming sentences, use these grammar exercises.

Apostrophes? Don't Do It!

People often get confused and think that apostrophes belong in these pronouns.

* Those people are crazy. It's not true. Don't do it unless you want to look like a fool! *

its, hers, ours, theirs, yours

Note that the word it's is different from the word its. It's is a contraction for the two words it is. Its is a possessive pronoun. 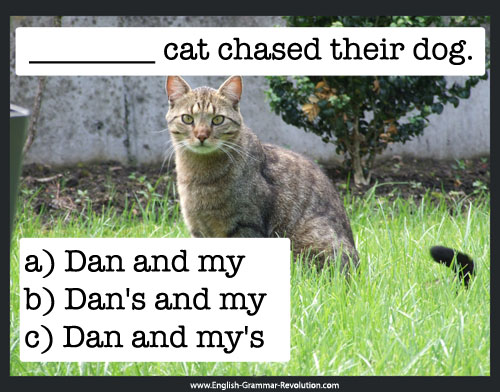 What's the right answer? You can learn how to form compound possessives that contain personal pronouns here.

Our Free Guide Gives You A Fun Way To Teach And Learn The Basics!

Finished Possessive Pronouns? Go Back to the Parts of Speech