What is an infinitive?

What is an infinitive?

When people talk about infinitives, they can be referring to two things: 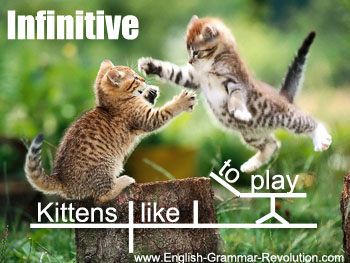 Here in this lesson, we're covering infinitive verbals (#2 above), and I'll just be referring to them as infinitives from here on out. (You can read more about the other kind of infinitive and other nonfinite verbs here on Wikipedia if you'd like.)

Psst! Words that are formed from verbs but don't act as verbs are called verbals. There are two other types of verbals: gerunds and participles.

So, let's get back to infinitive verbals! These guys are formed from verbs, but act as nouns, adjectives, or adverbs, and they're actually made up of two words: to + verb. These two words act together as a noun, adjective, or adverb.

The person to call is Jeff. (adjective)

Sometimes, identifying these guys in sentences can be tricky because the word to is omitted. That's not very nice, is it?

When this happens, we call them bare infinitives.

Here are some examples. I'll underline the special verbs so that you can see where they are. The bare infinitives are in bold.

They watched the ship sail.

I heard the doorbell ring.

When Margo slammed the door, she made the painting fall.

I love to swim in lakes.

These are made up of an infinitive and the words that modify and complement it.

Do you remember what these act as? NOUNS, ADJECTIVES, and ADVERBS right?

Let's look at one of the examples from above.

I love to swim in lakes.

The whole phrase together is acting as a noun (the direct object of love), but you may have noticed that in lakes is an adverbial prepositional phrase. It is telling us where you like to swim.

Does that means that an adverb (in lakes) is modifying a noun (to swim)?

Yes! Since these guys are formed from verbs, they maintain some attributes of verbs even though they act as nouns, adjectives, and adverbs.

Place the word to on an angled line, and write the verb on a horizontal line coming off the angled line.

With a forked line, connect this to the rest of the sentence wherever it should go. (These guys can be nouns, adjectives, or adverbs.)

I want to win.

After that, you can add any complements or modifiers.

I want to win the game.

Your website is awesome. It helped me get through my grammar class and earn my associate degree at age 51!!!