This list of verbs will help you understand verbs a little better. Do you remember that verbs are words that show actions or states of being? It's true!

There are two types of main verbs (action and linking), and there's one extra type that can help either of those main verbs. These helpers are called helping verbs.

On this page, we'll learn more about these verbs and see examples of all of them. Here we go! 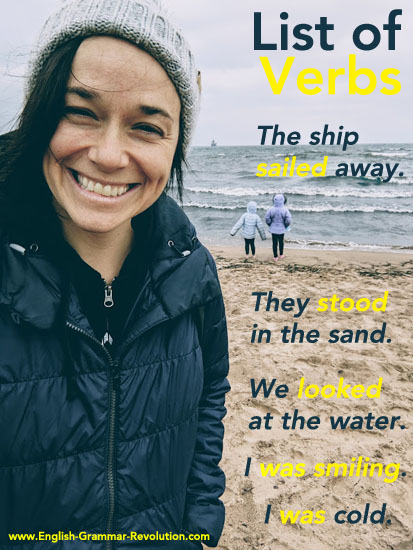 These are one of the types of main verbs. (Every sentence needs to have a subject and at least one main verb.) As their name implies, action verbs show action.

I walked around the lake.

Now it's your turn! Try thinking of three action verbs right now. Did you do it?

You probably picked verbs that showed movement that could be easily seen or heard (ran, jumped, shouted, skipped, cooked, wrote, etc.) That's great, but just keep in mind that there are many actions that can't be easily perceived with our eyes and ears (thought, contemplated, learned, etc.)

There are many, many action verbs out there, and we can further categorize them into three groups. Here are the three types of action verbs along with a list for each kind. Keep in mind that these lists aren't exhaustive.

Transitive active verbs are action verbs that transfer their action to something called a direct object.

Kicked is the transitive active action verb. It's transferring its action to ball, which is the direct object. Notice that ball is receiving the action. It's the thing that's getting kicked.

U unravel, unpack, use

Transitive passive verbs are action verbs that transfer their action to the subject.

My car was stolen.

Stolen is the transitive passive verb (was is a helping verb). It is transferring its action to car, which is the subject. Notice that car is receiving the action. It's the thing that's getting stolen.

Transitive passive verbs are always in verb phrases, and they are always made with the past participle form of the verb.

Transitive Passive List
To create a transitive passive verb, add is, am, are, was, were, be, being, or been in front of the past participles listed below.

Intransitive complete verbs are action verbs that don't transfer their action to anyone or anything. They are complete all by themselves!

Notice that the dog didn't bark something. It just barked. It's not transferring its action to a receiver.

You might find it helpful to think of linking verbs as equals signs between subjects and predicate nouns or predicate adjectives.

I am a teacher.

As you know, there are many, many action verbs. However, there are only a handful of verbs that can function as linking verbs. Here they are:

You have just learned about the two types of main verbs: action verbs and linking verbs. It's time to learn about helping verbs!

These do just what their name implies. They help the main verb in the sentence by telling us more about its tense and the subtleties of its meaning. Remember that the main verb will be either an action verb or a linking verb.

The dog will bark.

Bark is the main verb. It's an action verb. Will is the helping verb.

The helping verb(s) and the main verb come together to form a verb phrase.

Danny will be an artist.

Be is the main verb. It's a linking verb. Will is the helping verb. Both words together (will be) form a verb phrase.