Who vs. Whom
Which one should you use?

Who vs. Whom
Which one should you use?

It's time to study who vs. whom, a topic you've all been waiting for! First, let's address the elephant in the room.

Are you wondering why you need to learn about whom? Many people wish that whom would finally meet its demise and join the of ranks of archaic pronouns such as thy, thee, and thine, but we're not there yet. Whom is still expected to be used when it's appropriate, especially in formal writing.

What does The Office have to say about whom? 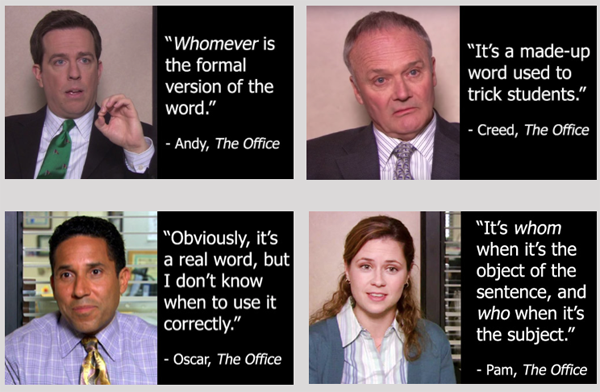 I've divided this lesson into two parts: a trick that will help you know which word to use, and a lesson on the underlying grammar concepts.

Directions For The Him* Test

Insert the words he and him into your sentence to see which one sounds right.

* You can also perform this test with she and her, but if you do it this way, you don't have the benefit of the matching m's like you do with him and whom.

Let's try this together. Imagine you're trying to figure out which word to use in the blank of the following sentence.

Try the sentence with he and him, and decide which one sounds better.

You were approached by _he/him_ after the game?

Which one sounds better? He or him? You were probably able to tell that him was the right choice. Since him works, the correct word in this sentence would be whom.

You were approached by whom after the game?

When it comes to certain questions, this test gets a little wonky. In order to perform this test on questions, it's helpful to turn them into statements first.

First things first. Change that question into a statement. Then you'll be ready to pick the right word.

You did send the card to whom.

Now you can change it back into a question.

Whom did you send the card to?

If your sentence is so complicated that you can't tell which word to use when you try the him test, I would suggest picking who. As Professor Paul Brians writes, "You'll bother fewer people and have a fair chance of being right."

Part 2: The Grammar of Who vs. Whom

Now it's time for you to learn the grammar behind it all!

Who is a subject, and whom is an object. 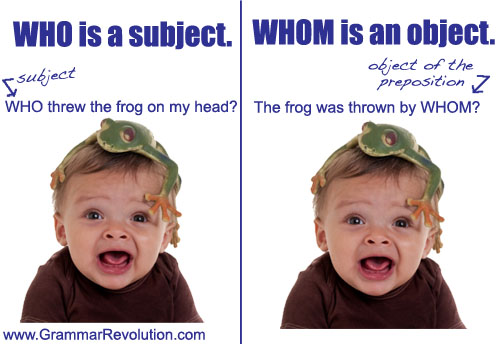 That sounds fairly straightforward, doesn't it? Things get complicated quickly though, when we put this into practice. Figuring out whether something is a subject or an object gets difficult as soon as you throw in complex sentences and verbals.

(If you really want to understand this, and other grammar issues, I strongly would encourage you to learn grammar through sentence diagramming. I find myself, to this day, diagramming sentences in my mind to figure out whether to use who or whom!)

Who is a subject.

Subjects are words that tell us whom or what a sentence is about. Whenever we need to use the word as a subject, it should be who.

There are two situations in which you would need a subject pronoun: for the subject of the sentence (That's easy to remember!), and for a predicate nominative. Let's look at each of those situations.

1. Subjects tell us whom or what a sentence is about.

All of the underlined words are subjects. Any time you're trying to figure out if you should use who or whom, and you're dealing with a subject, pick who.

If you're dealing with a more complicated sentence, know that who might be the subject of a dependent clause.

I asked him who was driving the bus.

Here, who is the right choice. It is the subject of the dependent noun clause who was driving the bus.

This is getting complicated, but I wanted to address the fact that finding the subject isn't always as easy as it can be when you have simple sentences like the ones above.

Predicate nominatives have an intimidating name, but they're simply nouns that come after linking verbs. (<-- Read that page if you need a lesson on linking verbs.)

They rename the subject of a sentence, and they should also be in the subjective case.

The president is he.

The president is who?

The underlined words are predicate nominatives. They come after the linking verb is.

Whom is an object.

There are different types of objects. Let's look at two of the most common objects: direct objects and objects of prepositions.

1. Direct objects are nouns or pronouns that receive the action of transitive active verbs.

I baked a cake.

You will only find direct objects in sentences with certain kinds of verbs (transitive active verbs). So, keep in mind that not every sentence will have a direct object.

Remember that sentences can be much more complicated than the examples above.

I asked him whom I should call.

Whom I should call is a dependent noun clause, and whom is the direct object of the verb should call.

2. Objects of prepositions are the nouns or pronouns that are in prepositional phrases.

I baked a cake for the class.

You baked a cake for whom?

Prepositional phrases start with a preposition and end with a noun called the object of the preposition. That noun or pronoun needs to be in the objective case.

Understanding sentence diagrams can help you remember this stuff. Diagrams are basically pictures of sentences. They use words and lines to convey the grammar of a sentence.

Sentence diagrams have different slots, and each slot has a certain job.

Highlighted in blue below are the slots for subjects and predicate nominatives. You would use the word who for anything in the blue slots.

Here is the skeleton of a sentence diagram showing you two slots that would be filled with subject pronouns like who. I highlighted the applicable slots in blue.

Here is a sentence diagram showing you the slots that would be used for objects. If a word is diagrammed in the yellow slots below, it should be whom.

Let's look at a sentence that is hard to figure out. Are you ready? Should the sentence below use whoever or whomever?

The him test doesn't really help in this situation, so let's diagram it and see what we discover. 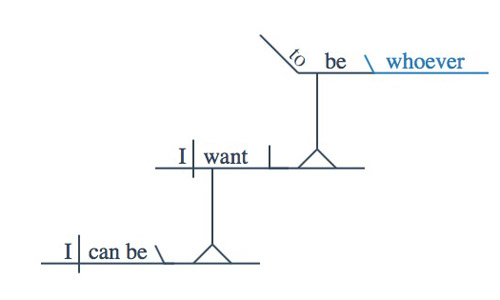 I can be whoever I want to be.

I wouldn't know the answer unless I diagrammed it. Now that I see the diagram, I know that whoever is the right choice because it's in the predicate nominative slot after a linking verb. Thank you, sentence diagrams!

My daughter and I looked at your helping verbs video, and we learned your song. Yay! It's brilliant. Thank you. This inspired my daughter to write out the song and draw a picture of a flower next to it with the title, 'I love helping verbs' in bubble writing. How cute is that?! Nothing previously has ever inspired her to write independently!

Your enthusiasm is contagious!